The American Civil War changed nearly everything in the South and deeply impacted the course of American history. Landscapes, farming practices, families, industries, homes, the economy and an entire way of life were radically altered and recovery, for some, would take generations. The Overton family was no exception. Judge Overton’s immediate family did not suffer the loss of family members, but their financial circumstances were altered. Property in the form of possessions, crops and animals from Travellers Rest and land holdings across state had been confiscated. At different times, their home was occupied by both Union and Confederate forces. As a Confederate supporter, Judge Overton’s son, then known by the honorary title of Col. Overton, was under threat of arrest and left his family and home to retreat behind Confederate lines. Remaining at Travellers Rest were nearly 80 women, children and enslaved workers.

As drastic as the overall changes were to life at Travellers Rest, no single event during the course of the Civil War more greatly impacted the home than the Battle of Nashville, December 15-16, 1864. Prior to those two days the home served as headquarters for General John Bell Hood, a location from which he sent numerous telegrams always beginning…”HdQrs: 6 Miles from Nashville On Franklin Pike.” 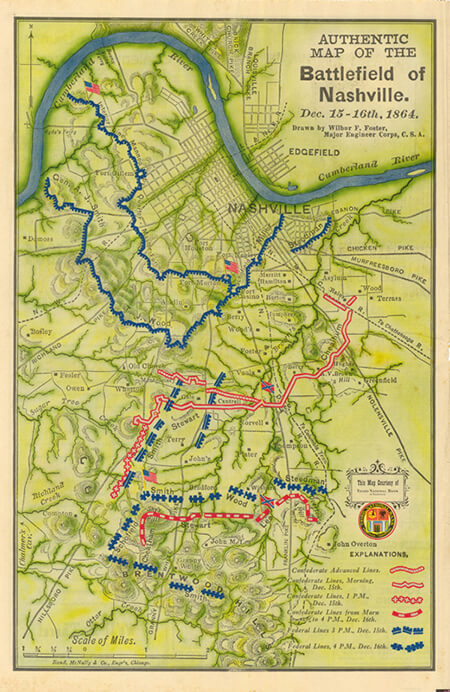 From Travellers Rest, General Hood set out on the morning of December 15, 1864, to engage General George H. Thomas in a quest to retake the city of Nashville from Union control. Travellers Rest was also the location to which Hood returned on the night of December 15, 1864, and saw the General leave for the final fateful day of battle, December 16th. By some analysis, the Battle of Nashville was the end for the Army of the Tennessee and the war in the West. A turning point for that battle was the defeat of Confederates during an engagement at Peach Orchard Hill where the United States Colored Troops displayed a level of courage that won them the admiration of Union and Confederate officers alike. Peach Orchard Hill also known as Overton Hills was then a part of Col. John Overton’s Travellers Rest.

Once the South conceded defeat, recovery took time. For Col. Overton, a Presidential pardon was needed before he could return to his home and family. Though he had lost much of his fortune, he had retained his connections and over time re-established himself as a businessman and community leader, even serving a term in the Tennessee State Legislature. He and his heirs would continue to influence the course of Nashville’s development into the 20th century. 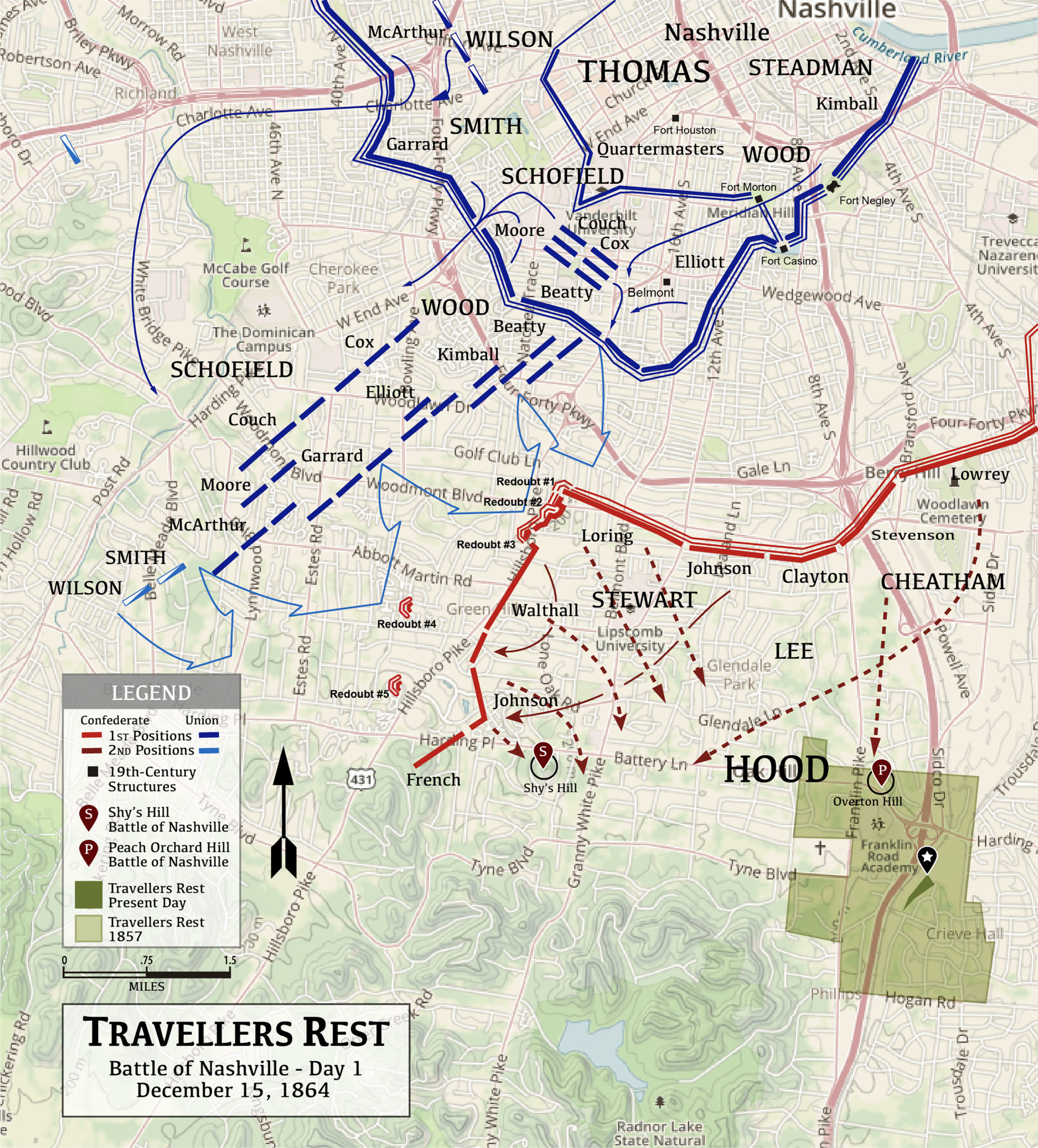 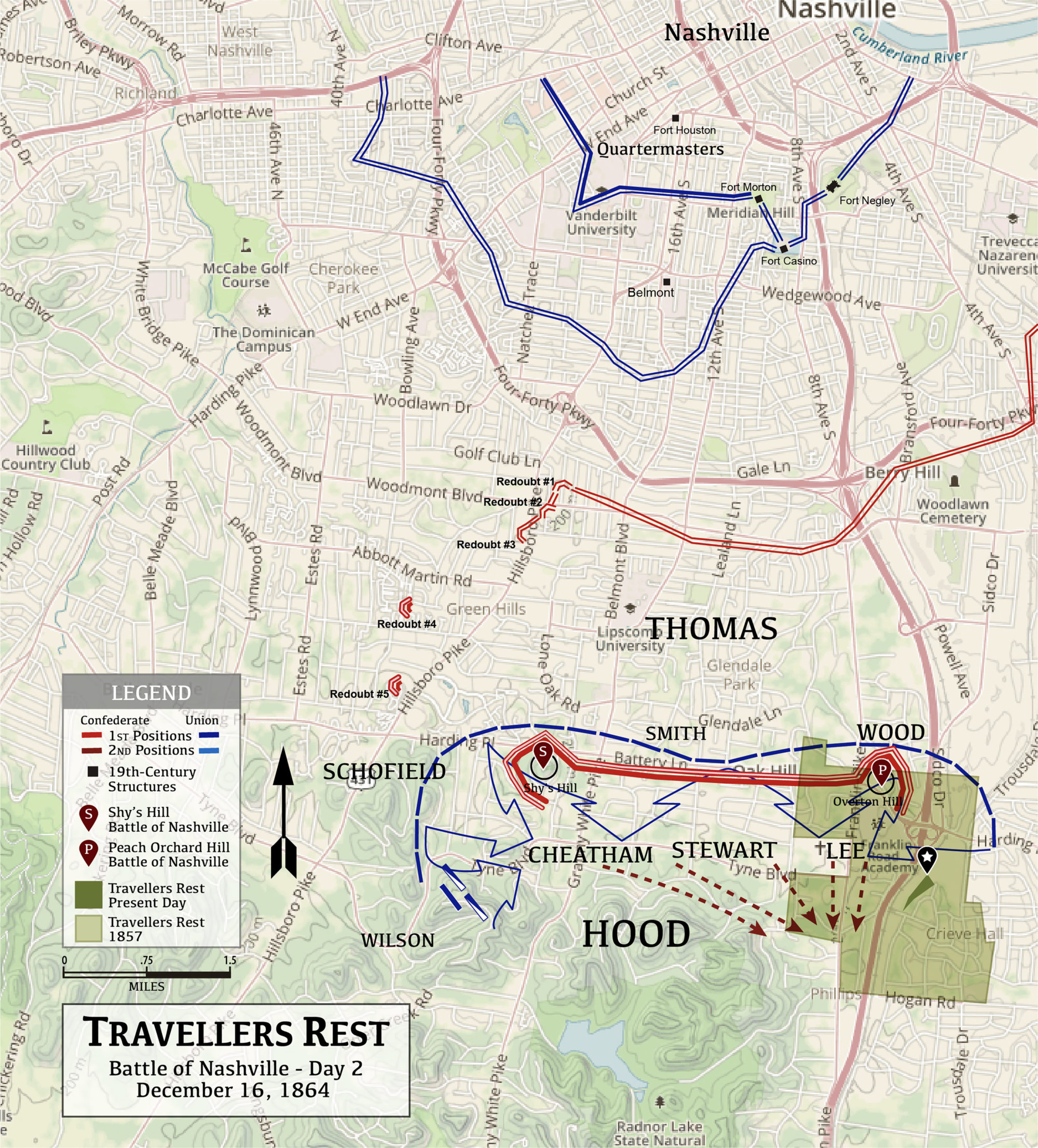 Above Left:This map of Day One of the Battle of Nashville assembles three separate maps: a map with battle lines, a map placing Travellers Rest in proximity to the engagement, and a contemporary Nashville street map. Click on map to magnify. The battle line map is courtesy of the Civil War Trust. See the Civil War Trust website for a further battle description. www.civilwar.org

Above Right: This map of Day Two of the Battle of Nashville assembles three separate maps: a map with battle lines, a map placing Travellers Rest in proximity to the engagement, and a contemporary Nashville street map. Click on map to magnify. The battle line map is courtesy of the Civil War Trust. See the Civil War Trust website for a further battle description. www.civilwar.org