Cultural Resources at Travellers Rest and the Protection of Prehistory

You are here: Home / Blog / Cultural Resources at Travellers Rest and the Protection of Prehistory

Travellers Rest claims to have nearly one thousand years of history. However, based on a recently obtained radiocarbon date from a prehistoric cooking hearth there are closer to 800 years of history at the site. The radiocarbon date revealed that Native people were living at the site as early as 1270 to 1316 A.D., approximately 500 years before John Overton purchased the land. The prehistoric Native American occupation of Travellers Rest took place during what archaeologists call the Mississippian period, which ranges from 1000 to 1450 A.D. in the Southeastern United States.

During this period of prehistory, Native Americans lived in villages or smaller hamlets year-round instead of only being settled seasonally. In villages food would have been shared or communal and diets consisted of corn, beans, and squash (commonly referred to as the three sisters by the later historic tribes), and would have been supplemented with snails, deer, mussels, and wild fruits and seeds. Ceramics would commonly be tempered with crushed mussel or snail shell. Adding this tempering agent helps bind the vessel during the firing process and make it more durable. Typical stone tools during the Mississippian period include triangular arrow points, serrated knives, scrapers and gravers (used in leatherworking), celts or axes, and stemmed and corner notched spear or dart points. Larger projectile points could be attached to a spear and thrusted or to a dart and thrown using an atlatl. Atlatls were typically made of carved wood and could double the distance and speed with which a dart could be thrown.

Water was extremely important to Native peoples, especially during the Mississippian period. In order to support a higher population Native Americans developed various farming practices, which would have required a nearby reliable source of water that was available year-round. It is likely that the spring just northeast of Travellers Rest would have initially attracted Native Americans to the area.

There are certain cultural elements of the Mississippian period which are unique to the Cumberland River Valley. In the area surrounding what is now Nashville, Native Americans often interred the deceased in ‘stone boxes’—limestone slabs were used to create coffins for the dead. Ornate objects were often interred along with the deceased as a sign of social status and included ceramic effigy vessels, shell beads, bone jewelry, and sometimes a ceramic mosaic floor.

Around 35 Native burials were uncovered when the cellar was dug for the 1799 portion of the historic house. It is because of this unexpected discovery that Travellers Rest was known as ‘Golgotha’ for a time. It is unknown what John Overton thought about the discovery of these burials because there are no written records, but it is likely that he was aware that people occupied the land prior to European settlement. Overton himself worked as a trade negotiator with historic Native Americans under President George Washington. After the Revolutionary War, land grants were given to military officers as payment for service. Many of those officers settled in Middle Tennessee and would have had interactions with the Native Americans still in the area. Those interactions were, understandably, mostly negative for both parties. Salt deposits which attract wild game made the Cumberland River Valley attractive land for hunting. During the Mississippian period there were a series of severe and prolonged droughts throughout the entire Southeastern United States and as a result Native Americans were, for the most part, not living permanently in Middle Tennessee by the time that land grant settlers arrived. 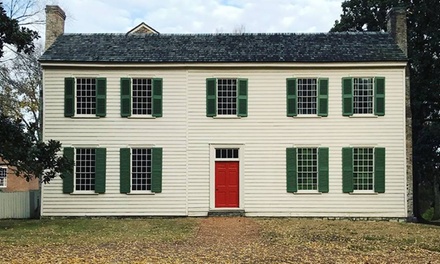 There have been numerous archaeological investigations at Travellers Rest over the years, beginning in 1805 when Dr. Rush Nutt visited the site as a guest of John Overton and described the site as having earthwork entrenchments and a flat-topped mound. If these features were present at one time, they are now gone. The landscape has been so drastically altered over such a long period of time that it is difficult to say what it looked like when Native Americans were still living there. If there was in fact a mound, it was likely in the spot that the historic house currently stands. Assuming that the burials uncovered during construction were not part of a mass grave, they likely belonged to a burial mound. Earthen mounds could be used for different purposes at different sites, but they commonly contained layered burials.

In the late 1800s, Frederick Ward Putnam of the Peabody Museum at Harvard University visited the site and was given numerous artifacts from stone box burials which were uncovered by the Overton family’s gardener, Edward Cross. Many of the mortuary artifacts uncovered inside the stone boxes are still housed at the Peabody Museum today. Some of the most interesting items include a ceramic female hooded bottle effigy vessel and a carved shell cox style gorget which features four pilated woodpeckers.

The most extensive excavations of Travellers Rest occurred from 1963 to 1973 and were performed by the Southeastern Indian Antiquities Survey led by avocational archaeologist H.C. (Buddy) Brehm. These excavations focused on burials and uncovered several house sites. The clay hearth used to radiocarbon date the Native occupation of the site was excavated from house site number 4, which was located near the modern visitor’s center. The SIAS excavated a total of 5 house sites and at least a dozen burials. The SIAS uncovered primarily household items like bone awls used for leatherworking, various stone tools, carved shell beads, clay marbles, ear spools, painted ceramic vessels, a mussel shell effigy bowl, and a shell-tempered wide mouthed filleted notched rim bowl which is filled with burned freshwater snail shells. 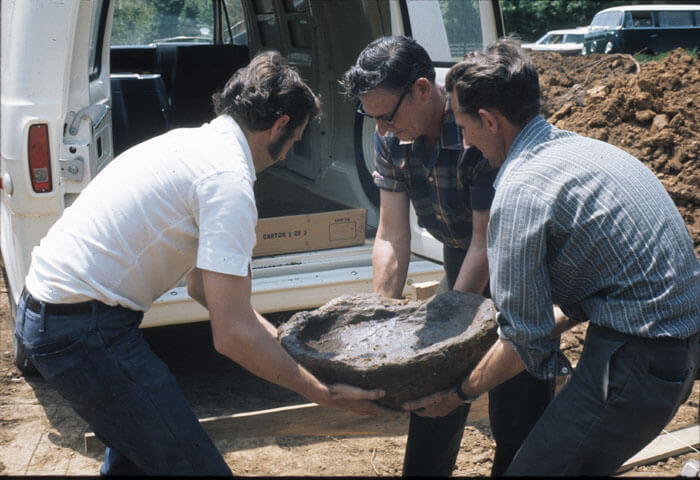 The Peabody Museum returned to Travellers Rest in 1988 and excavated in the cellar under the 1821 and 1885 portions of the house to determine the location of the previous historic kitchen. The intention of this investigation was to determine the original location of the semi-detached kitchen. The results were inconclusive, but the archaeologists believe that building materials such as limestone foundation stones were re-used for the construction of the 1885 wing of the historic house. The previous kitchen was likely a story and a half, with a large hearth and whitewashed or painted limestone walls on the first floor.

When the carriage house at Travellers Rest was demolished in the 1990s, archaeologists with DuVall and Associates performed a phase II mitigation to prepare the area for the construction of an education and event venue. They removed a total of 13 prehistoric stone box burials, which were later reburied elsewhere on the property, and associated grave goods. This excavation also revealed the remnants of a historic grain silo and dairy processing facility. The most notable artifact uncovered during the DuVall excavation is an anthropomorphic rim rider style ceramic effigy vessel. It is thought that this ‘rim rider’ represents the ‘wild boy’ character from Native myth. 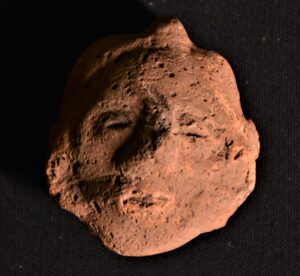 Before the Antiquities Act was passed in 1906, archaeological sites and objects were not protected under the law. Early archaeologists were often more concerned with obtaining objects of antiquity and displaying them in houses or selling them for profit rather than furthering our understanding of human culture. Graves were often disturbed for the sole purpose of artifact collection. Archaeology is a relatively young science but has made great strides since its conception in the early 1800s. Napoleon Bonaparte employed a number of trained scientists during his military campaign in Northern Africa whose purpose was to record in drawings and notes the ancient artifacts and architecture they saw. It was actually Napoleon’s men who found the Rosetta Stone, the ancient tablet which contains Greek and Coptic writing and Egyptian hieroglyphs. It would be roughly 30 years before the tablet was fully translated, but it remains one of the most important discoveries in the history of archaeology. The publication of drawings and notes from Napoleon’s campaign sparked a frenzy of interest in Egyptology in Europe and America. Unfortunately, in many cases this interest led to severe grave looting which was unregulated by the Egyptian government at the time. But this early interest in Egyptology and ancient Greek and Roman relics was the spark that ignited a push toward scientific archaeology in order to further our understanding of all humans, past and present.

In the United States, it wasn’t until 1990 that a law was passed to protect the remains or burials of prehistoric Native Americans in North America. This law, called the Native American Graves Protection and Repatriation Act (NAGPRA), prevents human remains from being displayed in museums and allows for any remains and associated funerary items excavated in the past and future to be returned to any Native tribal authorities in the area in which the remains and artifacts were found. NAGPRA requires that specific permits from the federal government be obtained before graves are disturbed. In most cases, archaeologists have between 30 and 90 days to complete the recording process to determine cultural affiliation of the remains and return them to tribal authorities. Because of the numerous Native burials previously uncovered on the site, Travellers Rest currently refrains from undertaking any unnecessary ground-breaking activities. It is our job to protect the cultural resources on the property and assure that we are representing the history of our site in the most ethical and culturally sensitive way. In the future, we would like to have a ground penetrating radar survey performed of the site, which will allow us to avoid any undisturbed burials and reveal more information about historic and prehistoric features.