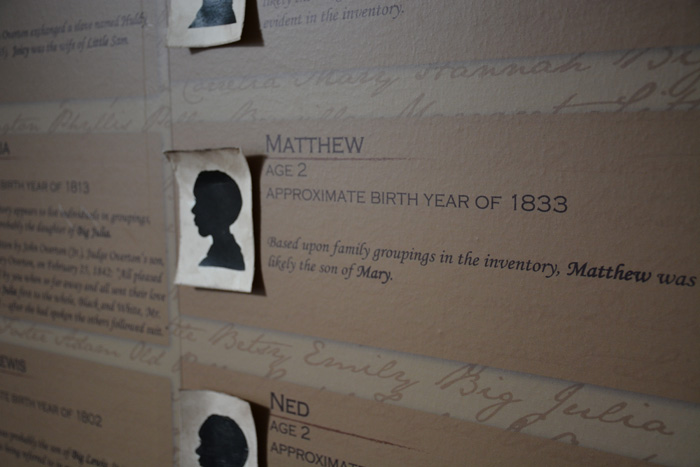 A Past Uncovered: The Story of the Enslaved People of Travellers Rest

A Past Uncovered: The Story of the Enslaved People of Travellers Rest is an exhibit that utilizes recovered historical documents – letters, ledgers and advertisements – to paint a picture of the individuals who once lived and worked at the home of Judge John Overton.

The Weaving House, c. 1820, which served as a home for two former slaves after the Civil War, houses the exhibit. Highlights include original and reproduced nineteenth century artifacts and reproduced historical documents. Guests will leave with a better understanding of slavery in Nashville and what it was like to be a skilled apprentice or tradesmen under the yoke of slavery. Chronologically, the exhibit spans 1790 to 1890, with the primary focus being pre-Civil War.

Entrance to the exhibition is included in the cost of admission to Travellers Rest.

A Past Uncovered was supported in part by the Tennessee Civil War National Heritage Area which is a partnership unit of the National Park Service and is administered by the Center for Historic Preservation at Middle Tennessee State University.

The Battle of Nashville: History Unfolds at Travellers Rest!

The Battle of Nashville exhibit tells the story of Travellers Rest and those who lived here during the Civil War. Artifacts, a video, an interactive touch screen, exhibit panels and maps help our visitors understand this crucial time in American history and one family who endured its challenges. Admission to this award winning exhibit is included with your ticket.

The Overton Family’s Journey Through the Civil War

John Overton, the founder of Travellers Rest, passed away in 1833 and by the time of the Civil War his son, John Overton, was living there with his wife, Harriet Maxwell Overton, their children, and his mother, Mary McConnell White May Overton. As a Nashville leader he had opposed Tennessee’s proposed secession from the Union. However, with the firing on Ft. Sumter and President Lincoln’s call for 75,000 men to put down the rebellion, Overton, like many other Middle Tennesseans, supported the move towards secession when a second vote was taken in June 1861.

Nashville held a key linkage to the deeper South with its transportation lines and central geographic location. Thus control of the city became a prime military objective of the Federal Army. In February 1862, the city became the first Southern capital to be captured and President Lincoln quickly appointed Andrew Johnson as Military Governor of the state. Johnson was determined to reconstruct Tennessee’s political class. He ordered those supporting the Confederacy to be seized and imprisoned until they swore loyalty oaths to the Union.

Overton refused, and a bounty of $5,000 was issued for his capture. Wishing to avoid imprisonment John Overton left Travellers Rest and his wife, Harriet, operated the plantation in his absence. Throughout the war she, her sisters, and their children stayed at Travellers Rest. Soon after the occupation of Nashville, Union General James Negley and his troops encamped on the Overton property for a time.

When the Confederate Army of Tennessee returned to Union occupied Nashville in December 1864, after the devastating Battle of Franklin, Travellers Rest served as headquarters for Confederate General John Bell Hood for two weeks prior to the Battle of Nashville. John Overton returned with Hood to the house for may have been the first time since he fled the city in 1862. It was at Travellers Rest that General Hood stayed during the battle and from which location he issued multiple telegrams regarding his plans. Copies of those telegrams are on display in the exhibit. After the Confederate defeat and retreat, Union General Washington Elliott came to Travellers Rest, and his units camped on the grounds.