You are here: Home / Blog / How Ground Penetrating Radar is Saving Archaeology

As an archaeologist, there is nothing more exciting than uncovering objects that haven’t been seen for hundreds or thousands of years. However, the act of removing these artifacts from their context within the ground is in itself destructive. Once deposits are removed from the ground they cannot be put back, and any information that was missed during excavation or misplaced during curation is information that can never be recovered. As archaeologists, our priority should be to protect cultural remains for future generations because no one can predict how our understanding of human culture will change over time or how field work methodologies will evolve. 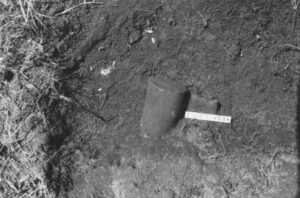 Picture of a prehistoric celt tool exposed during a 1967 excavation performed by the Southeastern Indian Antiquities Survey. Image from Travellers Rest Collection.

Field work methods have improved significantly over the last 30 years. Archaeologists can now use different technologies to get an idea of what is under the ground without disturbing it. Methods that prevent the destruction of archaeological deposits are now a preferred way of gaining information about features like buried historic structure foundations and historic and prehistoric graves. Ground penetrating radar is one of these technologies that has become essential to archaeologists and their pursuit to gain knowledge about prehistoric peoples without destroying the physical remains of that culture.

Essentially, ground penetrating radar (GPR) uses electromagnetic radar pulses to generate a 3-dimensional image of buried features. The map produced by this survey can be directly applied to maps of known archaeological deposits and underground features. Ground penetrating radar could be extremely useful for sites like Travellers Rest because of the ongoing routine maintenance of underground electrical and water lines that is necessary to keep the site functioning as a publicly accessible museum while still upholding our responsibilities as stewards of the cultural materials located underground. This method allows cultural institutions to preserve resources and create long-term plans for preventative maintenance instead of the emergency recovery of archaeological materials. 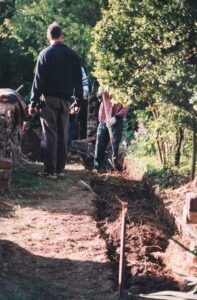 GPR surveying was cost prohibitive for most institutions when it was first adopted by archaeologists as a field work method in the 1990s. However, with technological advances it has become more easily accessible and can actually be more cost efficient than traditional field work methods—GPR requires less time and manpower than larger phase I shovel test surveys.

Follow the link below to access the Tennessee Conservationist and read about a recent ground penetrating radar survey done at Mound Bottom State Archaeological Area, one of the largest Mississippian period mound sites in Middle Tennessee.