Reflections on a Bed Warmer

You are here: Home / Blog / Reflections on a Bed Warmer 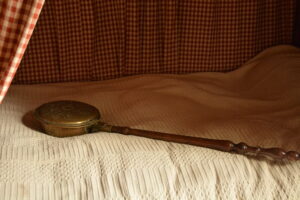 After joining the staff here at Historic Travellers Rest I found myself drawn to the bed warmer we keep on the bed in the Cold Room. (I love all the well-used artifacts we have and often imagine the hands that used them.)  I began telling people about the way the bed warmer was used. Hot coals are scooped from the edge of the fire into the “pan” and the long handle would be used to move the pan around the covers and mattress of the bed, like a giant iron, to warm them.  After that, the pan must be emptied back into the fireplace. Before long, I also realized by whom it was used.  The “ladies of the house” would not have been the ones welding that tool; one of the enslaved house staff would have been the user. That brought about the awareness that the enslaved persons would have put the Overton family members to bed before being allowed to go to their homes, and, furthermore, those same people would be up before the Overton family the next morning, stoking fires and setting up wash bowls, and emptying chamber pots.  That would be an absolutely grueling day for those who work only 4 or 5 days a week as we do in the 21st century, but these people had no days off, other than the occasional Sunday, no vacation, no protected time for themselves at all; they served at the whim of a master 24/7.  This has certainly led to a new-found appreciation of the difficulty of the lives the enslaved people who worked in the home were forced to live.