On December 16, 1864, the second and final day of fighting during the Battle of Nashville commenced. A large portion of the fighting occurred on Peach Orchard Hill; a significant high ground also called Overton Hill for its location on the property of Colonel John Overton. The hill was situated a quarter of a mile north of Travellers Rest, the home of the Overton family. Today the hill can be found at the corner of Harding Place and Franklin Road, mostly covered by Franklin Road Academy’s football field. The hallowed ground of Peach Orchard Hill is especially significant, because it is the location where the largest number of United States Colored Troops (USCT) fought in a major engagement during the Civil War.

USCT troops were always led by white officers and were usually only used for building fortifications, guarding forts and rail lines, and interring dead bodies for proper burial. However, their commanding officers at the Battle of Nashville decided they would give these African American soldiers a chance to prove themselves in the heat of battle. There were 13,000 USCT troops consisting of eight regiments-the 12th, 13th, 14th, 16th, 17th, 18th, 44th, and 100th that fought at the Battle of Nashville. On the second day of the battle, the 12th, 13th, and 100th directly engaged in fighting on Peach Orchard Hill in an effort to force Confederate forces off of the hill. 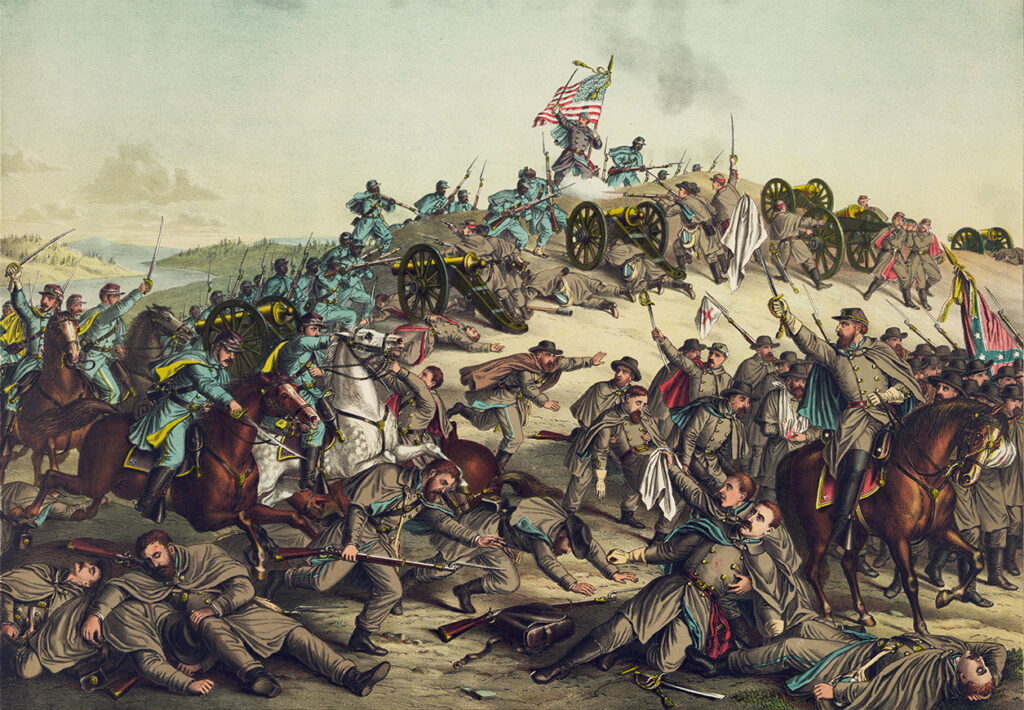 Battle of Nashville: Kurz and Allison were a major publisher of chromolithographs in the late 19th century. Based at 267-269 Wabash Avenue in Chicago, they built their reputation on large prints published in the mid-1880s depicting battles of the American Civil War.

The USCT regiments were placed under the command of Colonel Charles R. Thompson’s forces in Union General Thomas J. Wood’s 4th Corps on the far-left flank of the Union army. At 3:00pm, the 12th and 100th would be a part of the 4th Corps’ effort to take the hill with the 13th in support. When the 12th, 100th, and the rest of the corps were stalled due to heavy fire and terrain, the 13th continued on up the hill pushing past the other bogged-down elements of the army. The 13th suffered heavy losses, 221 casualties, which amounted to about 40 percent of the regiment, in their failed attempt to take control of the Confederate earthworks. While the 13th was not successful in capturing the hill, their efforts played a role in forcing Confederate commander John Bell Hood to send two brigades to re-enforce Confederate forces on Peach Orchard Hill. The movement of men away from the left flank of Hood’s Army weakened the already thin Confederate lines resulting in the fall of Shy’s Hill, which sent a ripple of retreats and surrenders all the way across the Rebel lines to Peach Orchard Hill ending the fighting at the Battle of Nashville.

After the battle, white officers and commanders praised the efforts of the USCT who fought during the two days of fighting south of Nashville. After observing the black and white soldiers lying together, Union commander General George H. Thomas who had previously and publicly shown doubts about the fighting capability of the USCT said, “Gentlemen, the question is settled, negro soldiers will fight.” The efforts of the USCT at the Battle of Nashville were not only effective in helping to end the fighting ability of the Confederate Army of Tennessee, but showed the residents of Nashville and the country as a whole that African American soldiers were equal to their white counterparts when given the chance to prove themselves. The efforts of the United States Colored Troops who fought at the Battle of Nashville are not only a testament to the effectiveness of black soldiery, but also as a foundational stride in American history toward a more equal union. 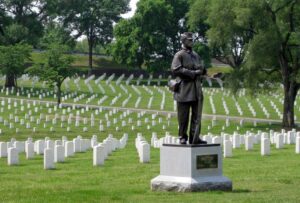 USCT Memorial: The graves of many of the men who died at Peach Orchard Hill surround this 9-foot bronze statue in the Nashville National Cemetery, dedicated in 2003 to “the 20,133 who served as United states Colored Troops In the Union Army.”
(Photo by Tom Lawrence for Battle of Nashville Trust)